Using the joy of movement to get more students into STEM

Science, Technology, Engineering and Mathematics – the so-called STEM subjects – are rather boring and not much fun for students at school? Too few boys and especially girls want to pursue a study or a further career in any of these subjects. Let’s change this through the joy of movement!

cosinuss° is one of the partners in the “STEM on the Move” research and innovation project to put Science, Technology, Engineering and Mathematics in practice and make them more fun and vivid for students in schools. The goal of the project is to develop four movement-based STEM learning modules for schools:

The project is sponsored by the Federal Ministry of Education and Research where cosinuss° will collaborate with partners of the international Sports-Innovation-Network (SINN-i) to pursue the development of the swimming and the throwing module. cosinuss° patented ear-connect technology will be used and integrated into the swimming module in particular.

The international Sports-Innovation-Network (SINN-i) is a network that brings together enthusiastic innovators and competent partners to create and stimulate innovations in the field of sports, health and physical activity. The core focus is to bring more joy of movement into the world. Industry and research partners from Germany, Spain, Great Britain, Japan and South Africa participate in the “STEM on the Move” Project.

Update 2021: STEM on the move – cosinuss° keeps it running

Beginning of November an initiative in the Olympia swimming pool in Munich was planned where students of the ninth grade were supposed to learn about STEM subjects as well as swimming techniques “on the play”. cosinuss° intended to participate by setting up a working station for the students and providing their in-ear sensing device in combination with pre-defined exercises for them. However, due to the current pandemic situation the planned event had to fall through, nevertheless, an alternative date in April 2022 has already been fixed. In order to promote the STEM project anyway, a round table compliant to Corona rules was organized and carried out by the Innovationsmanufaktur, another partner of the STEM on the Move project. 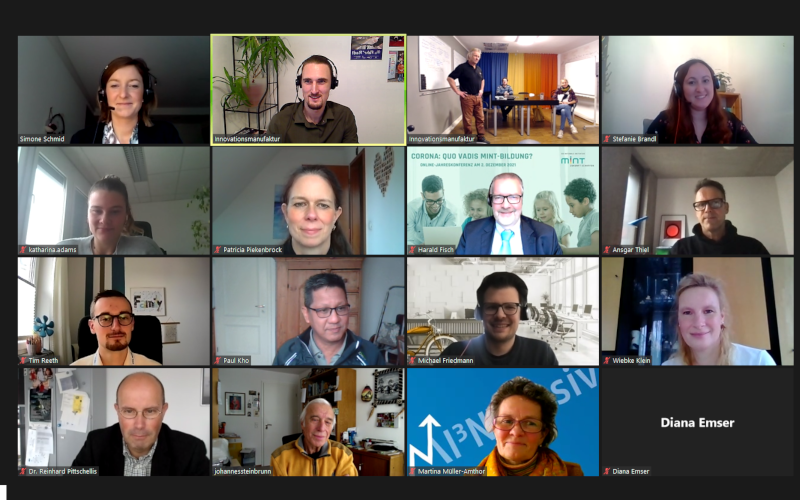 cosinuss°, represented by Katharina Adams (division “Business and Development”) and Fiona von der Straten (division “Electrical Engineering”) happily took this opportunity to present their planned workshop for the students and their newly developed in-ear sensor specifically designed for the STEM swimming module. Among the heterogeneous crew of participants from different backgrounds, Mister Harald Fisch, CEO of the initiative “MINT Zukunft schaffen”, stuck out due to his enthusiasm and willingness to support the presented project. Under the bottom line, all of the participants were on the same page concerning the importance of promoting innovative learning methods in combination with encouraging students to exercise – nowadays even more than ever. cosinuss° keeps it running and is not only looking forward to the swimming workshop in April but also to bringing the swimming module to schools in Madrid and Menorca.

Having tackled the challenges of getting the sensor waterproof, transmitting data while swimming as well as adapting algorithms to the complex movements of swimming, at the end of April cosinuss° had everything prepared to finally go to schools and spread the idea of the STEM on the move project.

cosinuss° goes international – STEM on the move in Menorca, Spain

After months of preparation and a close collaboration with the IES Josep Miquel Guàrdia high school in Menorca (Spain), the cosinuss° team was finally ready to pack their suitcases to cross the ocean for organizing a swimming day with the Menorcan students. For this purpose, cosinuss° not only sent their own team, namely Shabnam Motamedirad (Software Engineer), Katharina Adams (Business Development / Project Manager), Clara Piris Burgos (Electrical & Information Technology) and Fiona von der Straten (Electrical & Information Technology) but also the exercise biologist and triathlon coach Dr. Martin Schönfelder who is a lecturer at the Technical University of Munich (TUM), to assist teaching STEM contents as well as the swim training (see picture below). 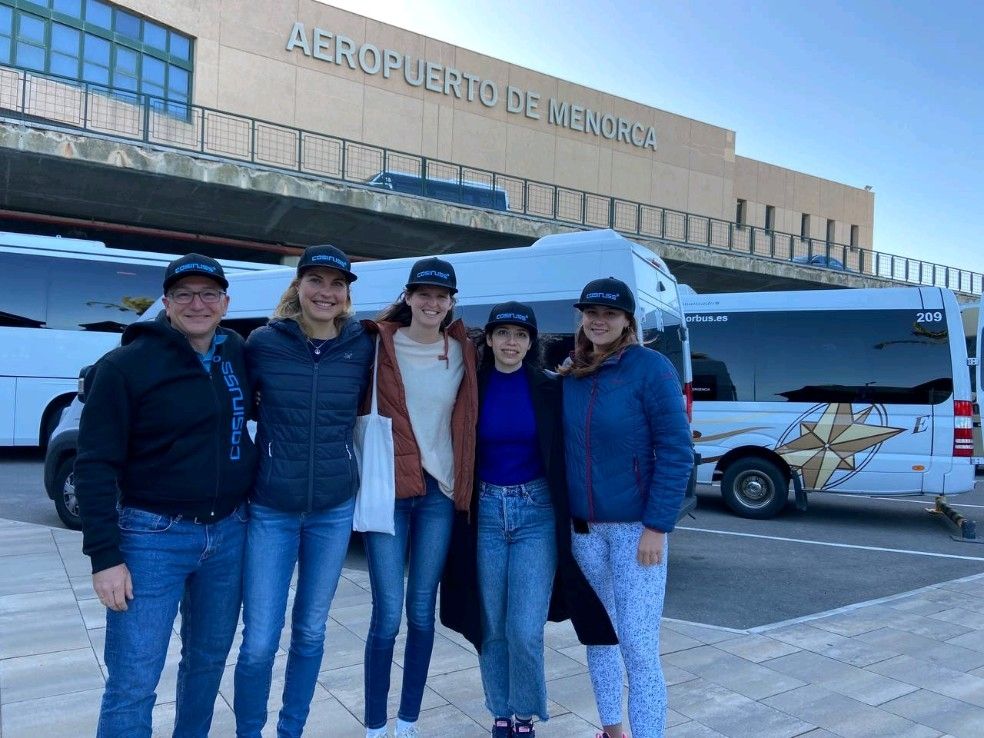 After final preparations and test runs in the swimming pool of Alaoir, the cosinuss° team arrived at the IES high school in the early morning of the 26th of April. In front of 40 students, cosinuss° started off with a presentation of the STEM on the move project, followed by a lecture held by Dr. Martin Schönfelder about the science and biology behind swimming activities. 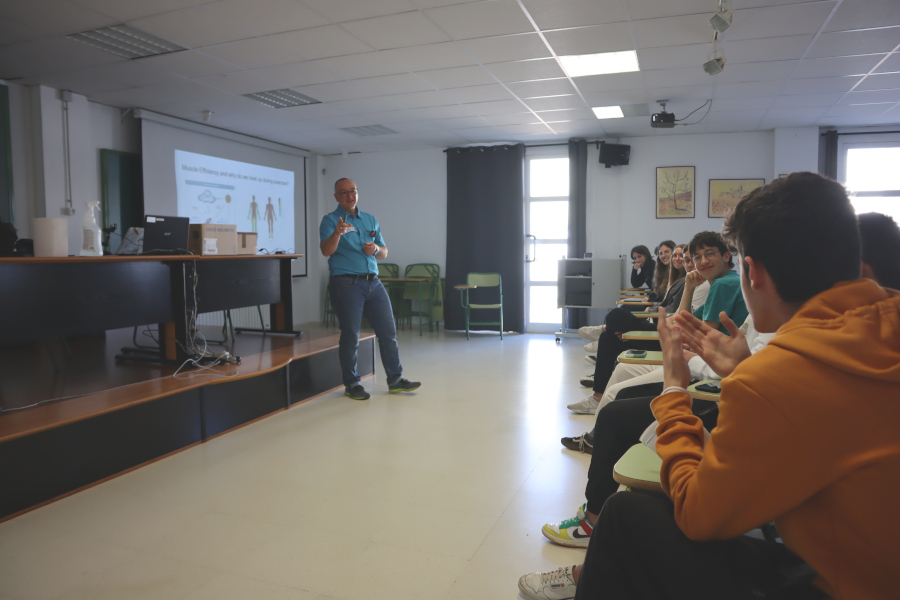 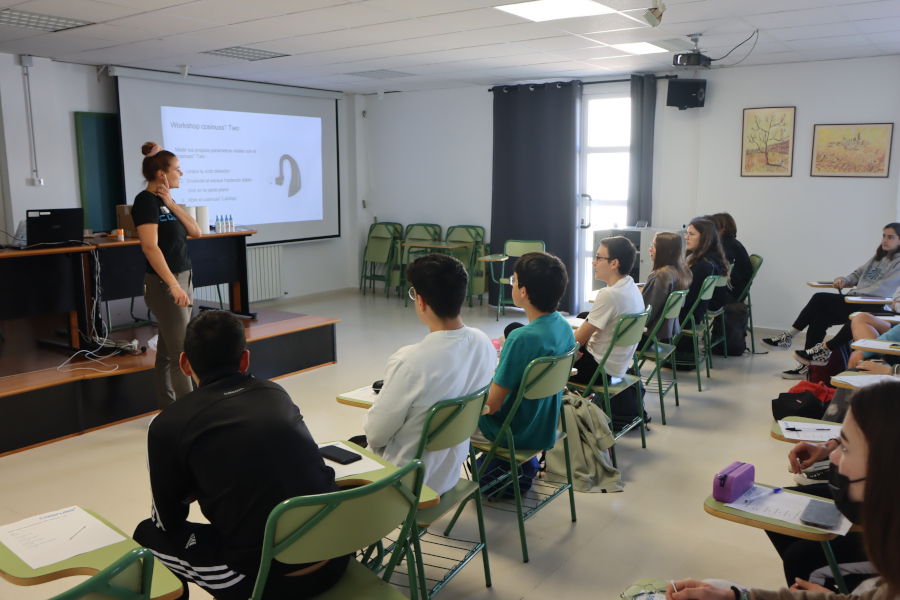 After that, cosinuss° had prepared a workshop with the in-ear sensors. In different situations such as sitting, walking and jumping intensely, the students could observe changes in their pulse rate, body core temperature as well as SpO2 (oxygen saturation) values displayed in the cosinuss° App on their phones. With great enthusiasm, the students investigated changes of vital signs, even sprinting around the classroom trying to raise their heart rate as much as possible. 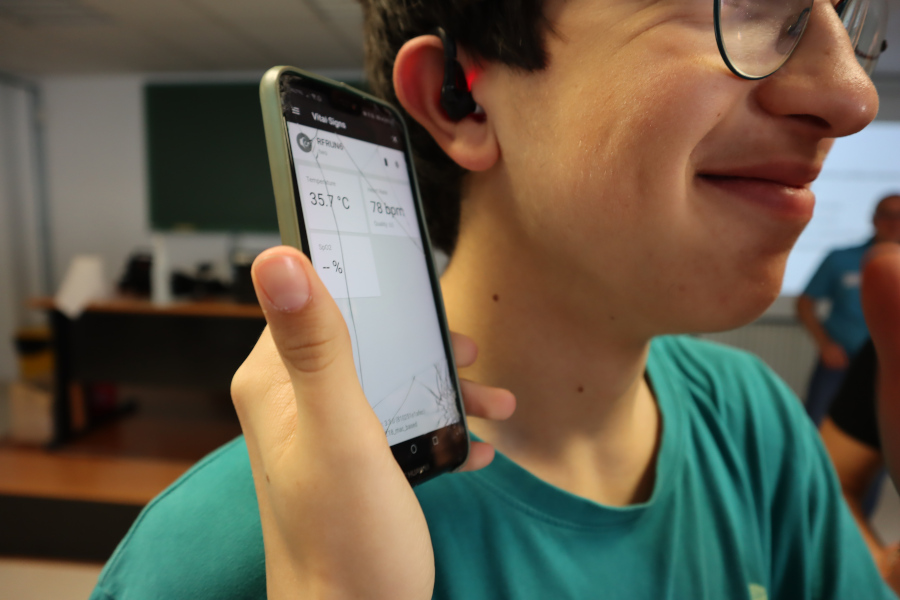 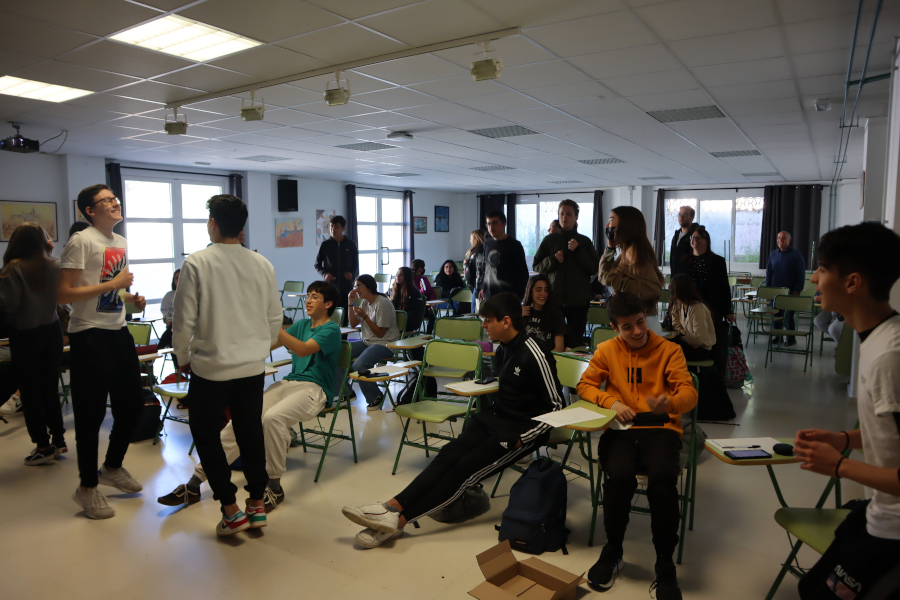 The technical set-up at the Alaoir swimming pool was already prepared by the cosinuss° team. The swim training was organized in four stations supervised by cosinuss°. The students were separated in groups, one group per station and rotating after 20 minutes. For the “diving”, “speed intervals” and “push-off” stations, students wore a cosinuss° in-ear sensor for visualizing their vital parameters in real-time but also for recording their vital signs as well as acceleration data. Dr. Martin Schönfelder supervised the fourth station, putting the focus on the swimming skills of the students and correcting them individually. A fun competition between the groups was putting the finishing touch to the swimming day. 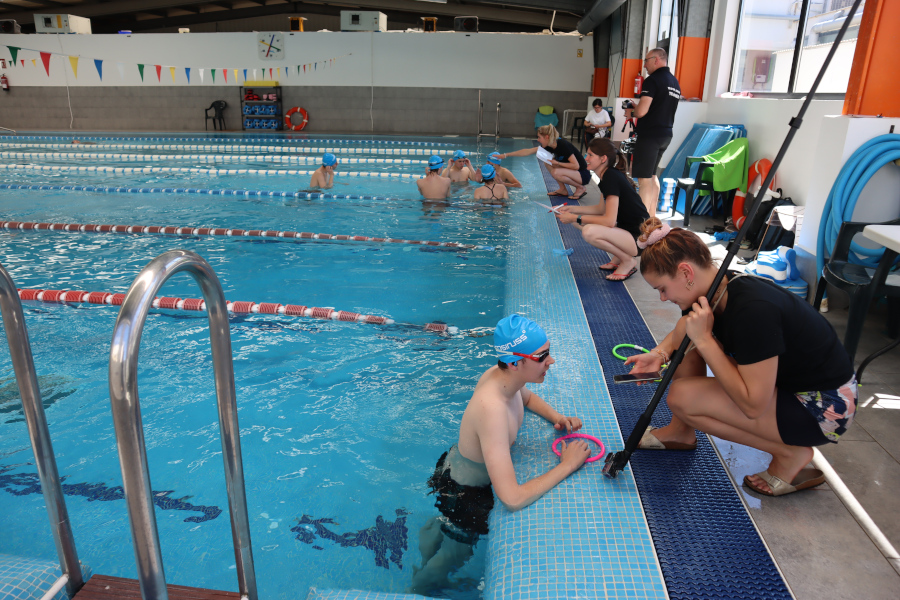 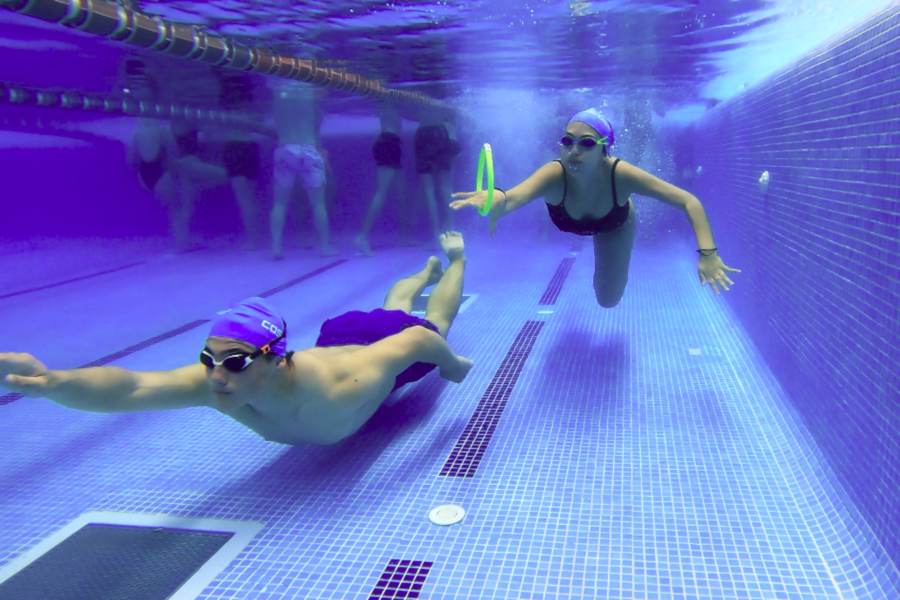 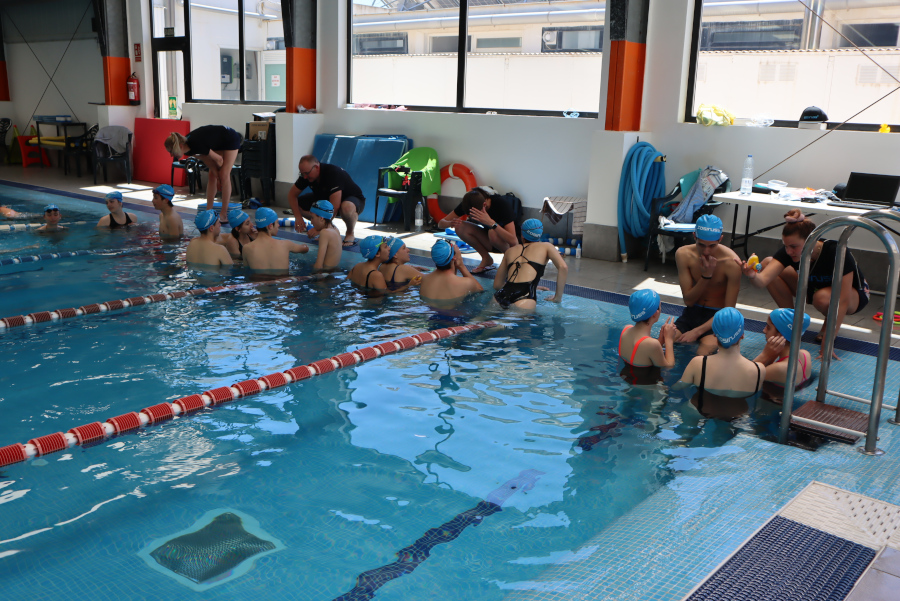 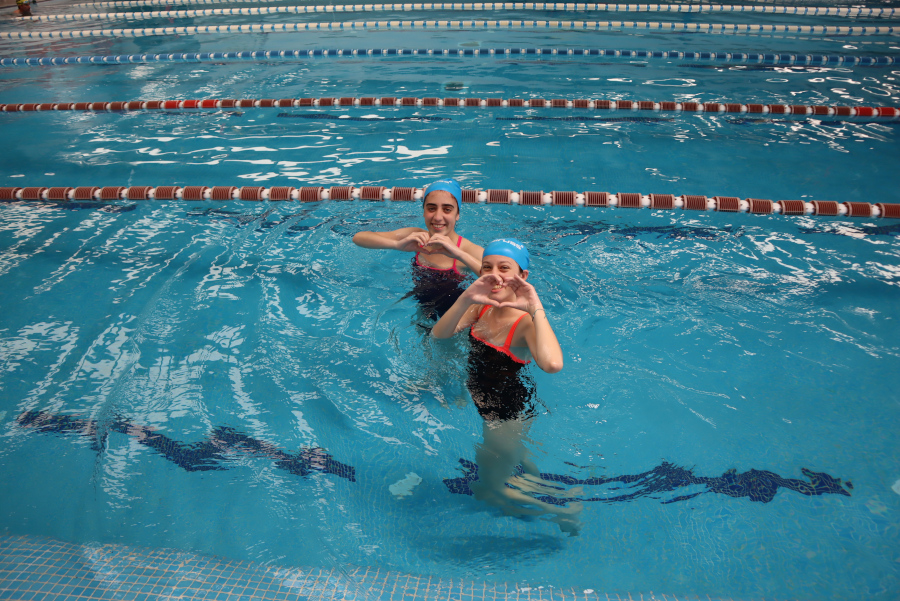 In total, the whole swimming day in Menorca was a complete success! The students really enjoyed themselves and begged the cosinuss° team to take over sports class every week from now on in order to make school more exciting and fun to attend.

However, with this swimming day in Menorca, the collaboration was not terminated. Arriving back in Munich, the cosinuss° team immediately prepared a follow-up online meeting with the IES school to present the data collected while swimming. Together with the students, the cosinuss° team analyzed the vital parameters and acceleration data, thereby explaining the science behind the experiences the students gained while swimming in the pool just one week prior to that. cosinuss° is confident that at least in the IES high school in Menorca the foundations for further classes in the sense of STEM on the move will take place, knowing that the students are already very much looking forward to it.

On the 28th of April, cosinuss° took the initiative and followed the invitation of the Innovationsmanufaktur to participate in a swimming day in the Olympia swimming pool in Munich (Germany). During this day, students from different schools were able to experience science while also doing different activities in the water. cosinuss° prepared one of multiple working stations for the students. For this station, the swimmers wore the cosinuss° in-ear sensor during various swimming activities of different intensity. Their vital parameters were visualized in real-time in the cosinuss° App, showing for example changes in their heart rate after exhausting speed intervals. 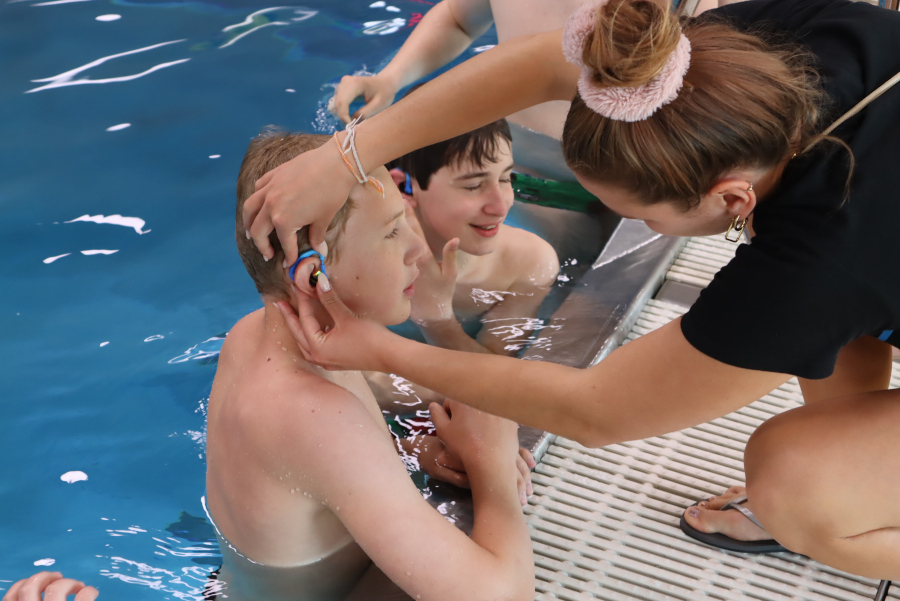 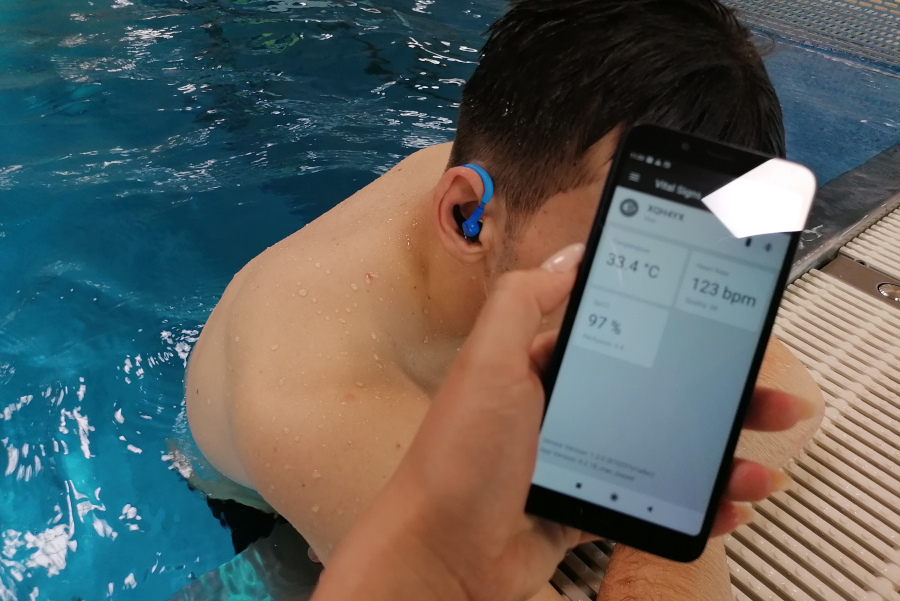 However, the focus was not only on interpreting the vital signs of the students but also teaching them some swimming skills and spark their joy for this kind of sport. Reflecting on the event, cosinuss° is happy to have received very enthusiastic and positive feedback from the students, asking the cosinuss° team to organize a swimming event in each of their schools, using the cosinuss° in-ear sensors. 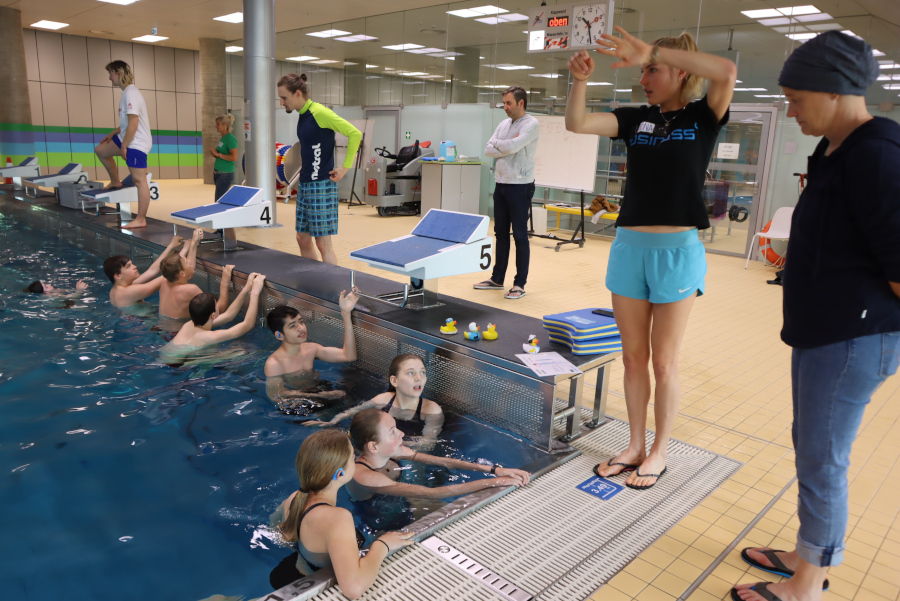 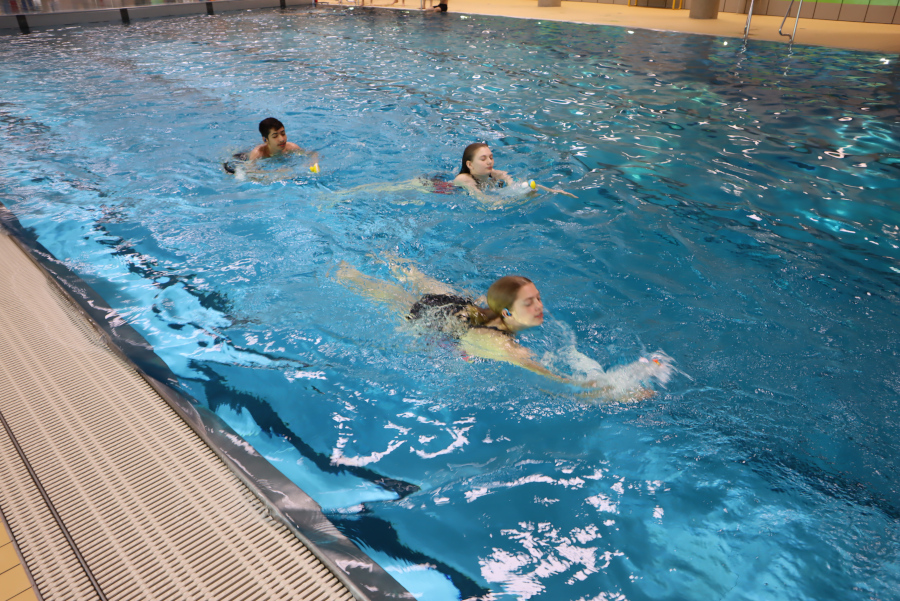 In addition to the positive feedback from the students, cosinuss° was able to gain valuable insights with regard to the technical set-up and master various challenges. The latter were primarily to make the in-ear sensor waterproof, to achieve valid measurement values in the water and to ensure continuous data transmission during swimming. Thus, on the one hand, changes to the hardware became necessary: The in-ear sensor was provided with a casting resin potting. In addition, a three-color LED was integrated into the PPG sensor (red, infrared, green) to ensure stable measurement even during strong head movement (see also: Measurement of vital & acceleration parameters during swimming). On the other hand, the cosinuss° software was optimized and adapted to the requirements. Since the students often submerge their heads during swimming and therefore Bluetooth connections are lost, the Bluetooth protocol was adapted for the transmission of vital signs and acceleration data. In addition, an integration of the measured values of several gateways took place on the cosinuss° Health Platform in order to obtain a complete coverage of the pool area.

Two examples of technical set-ups for the swimming use cases:

With the various technical set-ups for swimming events cosinuss° was able to show that connection failures, which can occur due to a lot of movement, large spaces and the absorption or shielding of radio waves by water, can be successfully prevented. Such set-ups can not only be used for tracking vital signs data while swimming but also for other use cases, especially in the medical field. For example, vital sign monitoring of patients in hospitals can benefit from such a mesh network consisting of several gateways: In this way, patients can be monitored continuously, even if they move from one floor to another. This technical set-up is also helpful for monitoring in nursing homes and homes for the elderly, where some residents often move within a large radius through the rooms and facilities.

STEM on the move database

cosinuss° developed a website as a database for sharing and exchanging learning modules about STEM contents. This includes proposals for entire teaching units as well as single lessons for subjects ranging from mathematics and physics across biology and information technology to physical education. The core contents of the STEM modules are based on cycling, swimming and throwing activities. As an add on, materials and insights from professional athletes are shared to further spark interest and motivation of students for different sports and the science behind them. This exchange platform provides the perfect means for the international partners and STEM enthusiasts to share their own material while getting inspired for further developing the daily school routine in the spirit of STEM on the move.

STEM on the move database