Oxygen saturation (sO2) refers to the percentage amount of oxygen in the blood. Among other things, it provides information about the functional capacity of the lungs and the effectiveness of oxygen transport in the blood. Oxygen saturation can be determined either outside the body via pulse oximetry or invasively with the aid of a blood gas analysis.

Definition: What is oxygen saturation?

Oxygen saturation describes what percentage of hemoglobin (Hb) is loaded with oxygen molecules.1 The oxygen inhaled via the lungs is absorbed by the hemoglobin and transported to the tissues via the bloodstream. There, the charged oxygen molecules are released to the cells.

The following types of oxygen saturation in the blood are distinguished:

Fig. 1: Simplified representation of oxygen exchange from the lungs to the blood.

Hemoglobin (Hb) is a protein composed of four subunits. The most important function of hemoglobin is the transport of oxygen in the blood. It is predominantly found in the red blood cells (erythrocytes). In small amounts it is also found in plasma as free Hb bound to haptoglobin.

Oxygen is taken up from the air we breathe by hemoglobin in the small pulmonary vessels, transported throughout the body by the bloodstream, and delivered to the cells in the tissues. The oxygen-loaded hemoglobin is called oxyhemoglobin. When it has released all the O2 molecules, it is called deoxyhemoglobin. In its discharged form, it can absorb carbon dioxide and transport it back to the pulmonary vessels. There, the CO2 is released and exhaled again. 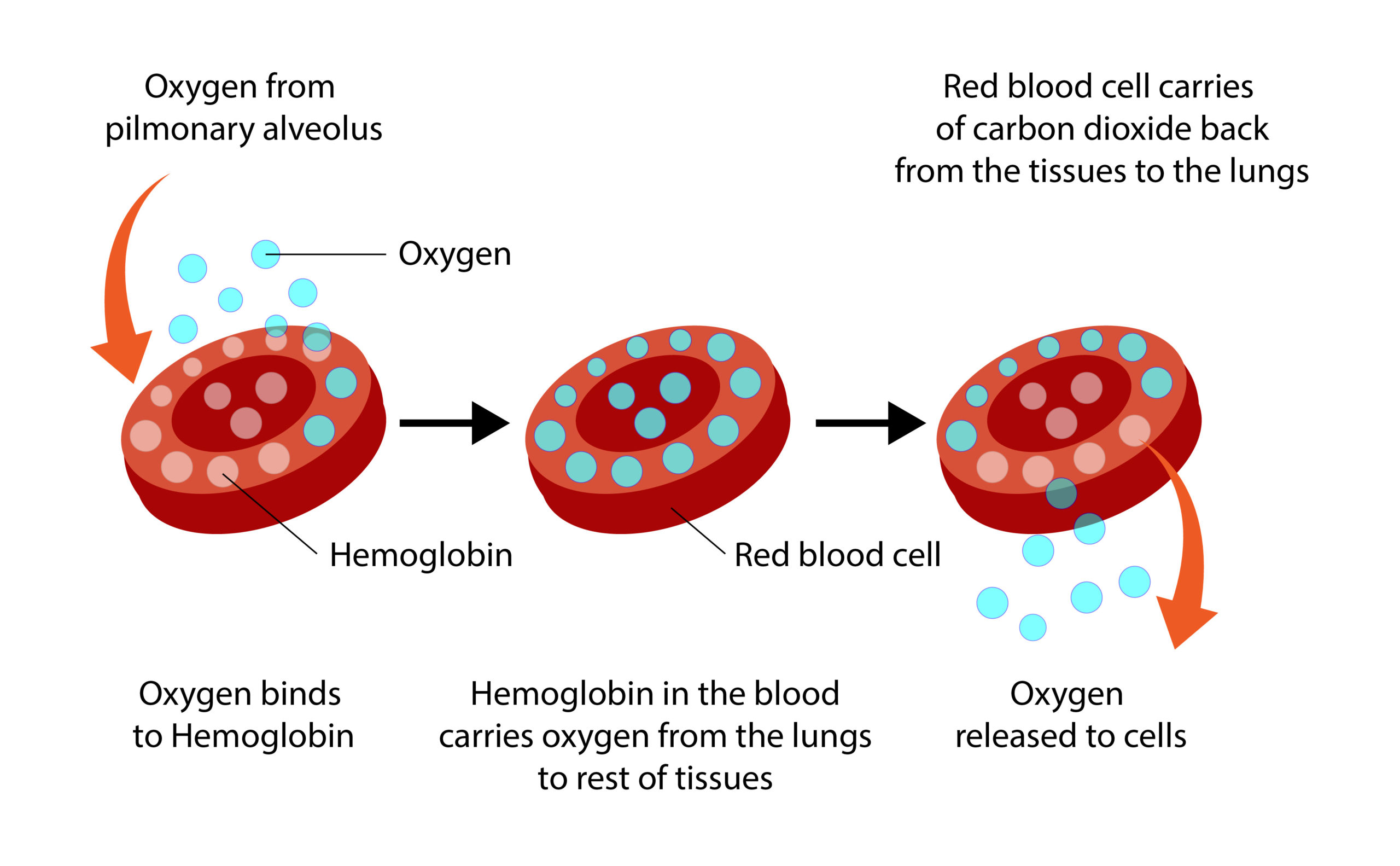 Fig. 2: Simplified representation of the loading and unloading of a hemoglobin with oxygen.

Depending on the loading or binding state, different hemoglobin variants are distinguished: 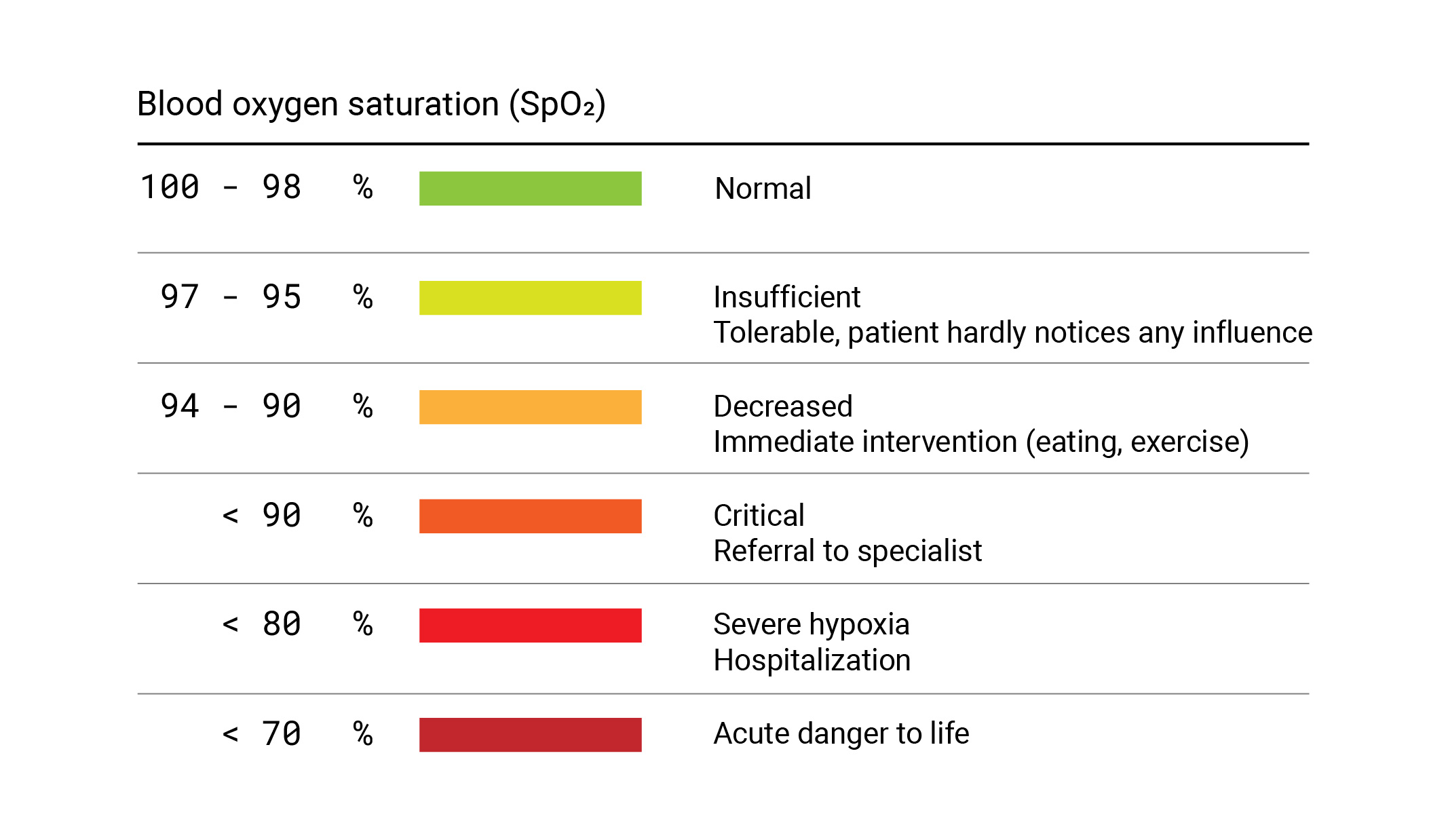 A slight increase in blood oxygen saturation can be achieved by very rapid, deep inhalation and exhalation (hyperventilation). This simultaneously reduces the carbon dioxide (CO2) content.7

In addition, oxygen saturation may also be elevated during oxygen therapy. However, if there is already an adequate supply of oxygen in the blood, the additional addition of O2 can increase the risk of lung failure, heart attacks, cardiac arrhythmias and organ failure. Too much oxygen is toxic to the body and can cause inflammation, oxidative stress or constriction of blood vessels in the lungs, cardiovascular and nervous systems.
According to a meta-study8 (2018), supplemental oxygen administration already has harmful effects from a baseline value of 94-96%. According to the study results, the risk of patient death increases steadily with increasing oxygen saturation.9

If oxygen saturation is too low, this is referred to as either hypoxemia or hypoxia. With hypoxemia the oxygen content in the arterial blood is reduced.10 Hypoxia is a lack of oxygen in the whole organism or in certain tissues. Symptoms may include anxiety and restlessness, dyspnea (shortness of breath), tachycardia (high heart rate), and increase in blood pressure.11

The following gradations of hypoxemia are made:12

The following forms of hypoxia are distinguished:13

There are many causes of low oxygen saturation: various lung diseases can lead to too little oxygen reaching the pulmonary alveoli (ventilation disorder). Diffusion disorders are also possible, in which the gas exchange between alveoli and capillaries is disturbed. In addition, diseases of the blood, such as anemia or hematopoiesis, cause impaired oxygen transport. Cardiovascular diseases such as heart failure cause insufficient oxygen supply to the organs due to vascular occlusion. In addition to diseases, environmental factors such as extreme altitudes can also lead to a decrease in oxygen saturation in the blood. Poisoning by e.g. medications, drugs or carbon monoxide also lead to a decrease in oxygen saturation.14

A special form of hypoxemia has occurred, particularly in connection with COVID-19: Many patients show no signs of shortness of breath or accelerated breathing despite severe hypoxemia with oxygen saturation levels as low as below 70%. This form of hypoxemia is particularly dangerous because, despite the absence of symptoms, decompensation of the lungs progresses rapidly and thus becomes life-threatening for patients.[/efn_note] 15

What does oxygen saturation say about health?

The measurement of oxygen saturation provides conclusions about the function of the lungs. By determining the saturation of the venous blood, the blood flow, oxygen uptake as well as metabolic activity of the tissue can be assessed. Peripheral oxygen saturation is also used to calculate arterial oxygen content (CaO2).16

In emergency medicine, the measurement of blood oxygen saturation is used to obtain an impression of the patient’s oxygen content and respiratory gas balance.

In addition, oxygen saturation is measured to monitor the course of chronic lung diseases such as asthma or COPD.18

When do you measure oxygen saturation?19 20

In the following cases, e.g. when certain symptoms occur or for various examinations, the measurement of oxygen saturation is useful from a medical point of view.

The partial pressure of oxygen is the pressure exerted by gaseous oxygen in the blood and is measured either in kilopascals (kPa) or millimeters of mercury (mmHg). The higher the partial pressure of oxygen (pO2) in the blood, the higher the oxygen saturation. This relationship is not linear, but s-shaped and can be represented in the oxygen dissociation curve (see Fig. 4). Thus, above a certain pO2, oxygen saturation increases only slightly. 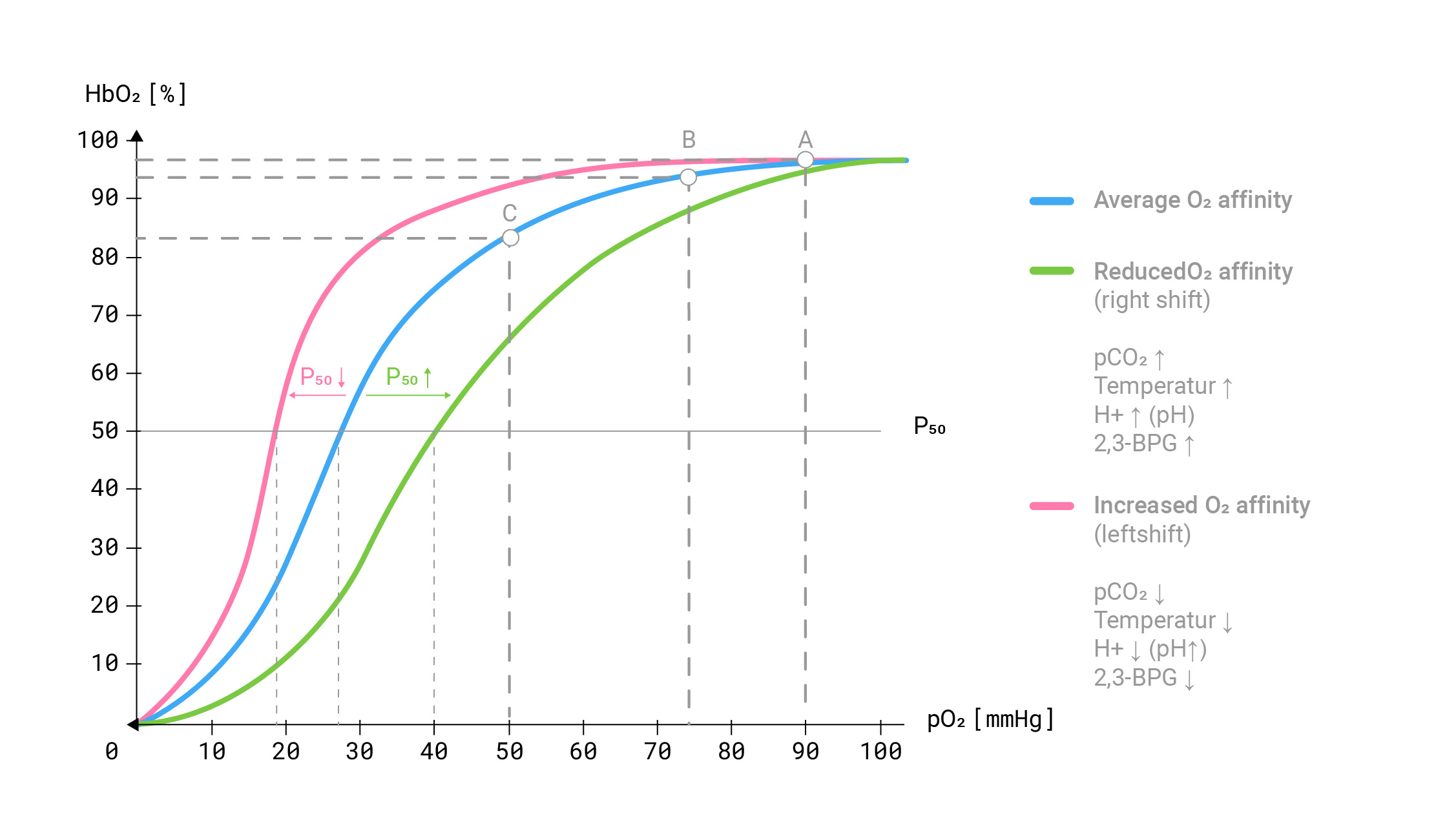 Fig. 4: The oxygen binding curve describes the relationship between the O2 saturation of hemoglobin and the partial pressure of oxygen (pO2) in the blood.


The shift of the oxygen dissociation curve to the left or right has many causes:

A leftward shift means that at the same oxygen partial pressure, the hemoglobin can bind more oxygen. The oxygen is absorbed more easily from the alveoli and the bond between hemoglobin and oxygen becomes stronger. However, this has the consequence that the oxygen can be released less well into the tissues.

Causes for a left drift:

Example: A leftward shift of the oxygen binding curve is seen in hypothermia (hypothermia).22 For example, if you are in a very cold environment for a long period of time, your body temperature may be reduced, resulting in hypothermia of individual local areas of the body (typically the hands and feet) or even the entire body.23

With a right shift, the bond between hemoglobin and oxygen is weaker. Oxygen cannot be absorbed as easily, but can be released into the tissues more easily.

Causes of a right shift:

Example: With increasing physical stress, there is a drop in pH due to an increase in protons in the blood (tissue acidosis). In addition, there is usually an increase in body temperature and an increase in CO2 partial pressure due to oxygen debt. These factors and the increasing concentration of 2,3-BPG cause a rightward shift in the oxygen binding curve and ensure that oxygen is more easily delivered to the tissues. However, hemoglobin no longer binds oxygen as strongly, which is why the respiration rate must increase. This relationship between pH, CO2 partial pressure with the oxygen dissociation curve is called the Bohr effect.

In addition to the influences on oxygen saturation or partial pressure already mentioned (pH, CO2 concentration, temperature, 2,3-BPG concentration), there are other factors that cause a change – usually a decrease – in arterial blood oxygen saturation. Some are described in more detail below.

In healthy people, these changes do not cause any problems compared to daytime breathing. In contrast, in patients with lung diseases such as pulmonary hypertension, they often lead to a lack of oxygen in the arterial blood.24

Oxygen saturation in babies and children

The circulation of a newborn baby changes immediately after birth. The oxygen saturation of approx. 50% increases directly after birth from approx. 60-65% to 90-96% within 10 minutes.26 27

With increasing altitude, air pressure and O2 partial pressure (PO2) in the ambient air decrease, so that oxygen can no longer be absorbed as well by the hemoglobin. The result is a lower partial pressure of oxygen in the blood as well as a lower oxygen saturation. Via peripheral chemoreceptors, this reduced oxygen saturation is perceived in the body and hyperventilation is triggered. This slightly increases the alveolar PO2 and activates the sympathetic nervous system. The resulting increased heart rate compensates for the lower O2 content per heartbeat. However, this so-called acute adaptation cannot prevent the maximum oxygen transport and thus the maximum aerobic capacity (VO2max) from being restricted. Thus, an untrained person loses about 1% of his VO2max per 100m at an altitude of 1,500m, resulting in a power loss of 10% at 2,500m, 25% at 4,000m, and 65% at 8,000m.
Systemic blood pressure does not change significantly during acute adaptation at altitude because sympathetic activation and the direct vasodilatory effect of hypoxia neutralize in the peripheral circulation.

Endurance training at altitude can be used specifically to increase performance. The lower blood oxygen saturation at altitude causes a variety of adaptation reactions over a longer period of time:

Influence of diseases on oxygen saturation

Pulmonary diseases such as

Diseases of the blood such as

Cardiovascular diseases such as

How is oxygen saturation measured?

Oxygen saturation can be measured either outside the body via pulse oximetry or with the help of a blood gas test.

Pulse oximetry is a non-invasive method for determining the oxygen saturation of the capillary blood (SpO2 value) and the pulse rate. Often, a clip with a sensor is attached to the fingertip or earlobe for measurement (pulse oximeter). The sensor consists of two parts: The light source emits red and infrared light alternately, which penetrates the skin. The light receiver (photodiode) records the light intensity and determines how much light of the different light colors was absorbed. The values measured in this way are usually very precise and correlate within a 4-percent deviation with the arterially measured oxygen saturation (SaO2). Pulse oximetry can only detect oxyhemoglobin or reduced hemoglobin, but not other hemoglobin variants such as carboxyhemoglobin or methemoglobin.31

Where is oxygen saturation measured?

Depending on the measurement method, oxygen saturation is measured at different points, since arterial blood is generally equally saturated throughout the body. Thus, measurement is theoretically possible everywhere.

How does cosinuss° measure vital signs?


Convenient and accurate pulse rate without any chest strap or ECG.


Seamless and continuous awareness of blood pressure changes. Simply inside the ear canal – without cuffs.

More on this topic:

The information provided here is not a substitute for professional advice or treatment by trained physicians and should not be used for independent diagnosis or treatment.