Is there any connection between teething and fever?

Teething and fever: In both cases, kids and parents often go through a hard time. Sleepless nights and a whiny, unhappy offspring – both usually going hand in hand with a fever. Or at least that’s what we think:

Scientific Research shows no connection between teething and fever

Carla Massignan and her team from the university of Santa Catarina in Brasil carried out a meta-analysis which evaluated ten major studies on the issue of primary tooth eruption. She found no evidence to support the thesis that a fever is or could be a sign of teething. Gingival irritation, irritability and drooling are the most common symptoms that show when the primary teeth come through. Additionally,  a slight rise in temperature is also common. But the temperature values remain below the threshold at which it is defined as a fever. Symptoms are more intense when the front teeth pass through the skin; Molars seem to be less troublesome.

So why do so many parents and even doctors link a fever to teething? The first tooth usually comes at the age of about six months. This, at the same time, is the age when nest protection – newborn’s antibody protection against infection from the mother – lets up and babies become more susceptible for infectious diseases. So in all probability, an infection and teething occur coincidentally. Especially, if one considers that ten to twelve infections per year are not unusual for kids under three years and teething takes approximately eight days per tooth. Most probably, the fever is caused by an infection and due to the higher temperatures babies’s teeth can break through easier and faster, explaining why teething seems to be connected with fever.

It is not known yet, whether it also applies the other way around. Meaning that eruption of teeth also weakens the immune system which then again makes the child susceptible for fever causing infections.

To put it in a nutshell

A body temperature above 100.4 F is caused by an illness and is not associated with teething.

This finding is crucial to detect and diagnose a disease correctly: Infections might be overlooked if it were assumed that a fever has been caused by teething. But a feverish child is sick and must be treated accordingly.

Now what happens if a baby is teething?

Some kids get teeth without showing any symptoms – others have a tough time. Applicable for all: The gum becomes more sensitive and reddens at the spot where later the tooth breaks through. The mucous membrane swells.

Other signs that may occur are drooling, gingival irritation, irritability, sucking finger, loss of appetite and agitated sleep. Body temperature may increase – this is not unusual. But the limit value for a fever is not reached. A running nose, diarrhea, facial rash and vomiting are also NOT signs of teething and ought to be watched and checked by a doctor, if necessary.

You can help your child through the process of teething, by giving him something solid or cold to bite on it – a teething ring, raw fennel, apple slices, hard crusts of bread, carrots or violet roots which also have an analgesic effect. Soothing gels, like Dentinox, have a locally numbing effect. The merely higher body temperature does not require treatment.

But if your kid does have an infection, read here what you should take notice of. 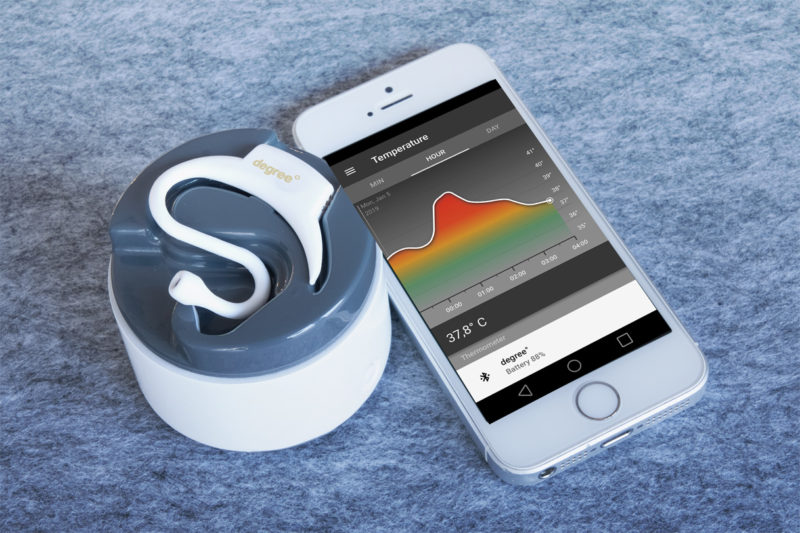 The health of your child is a matter close to our hearts. That is why we have done nothing less than revolutionize fever measurement and adapt it to our high demands. With our new clinical thermometer degree° you can now continuously measure the temperature of your child for the first time, anytime and anywhere. This way you can see how the fever develops – whether it rises or falls is displayed in real time on your mobile phone and you can immediately act on it.

About the Author: Leonie Adams

Get Social With Degree°